A COCONUT once really loved to travel. “I love packing my bags for vacation!”, she used to say, having travelled to all cool places around the planet. Wherever she went, she took pictures so as to have something to remember, keeping them in a box at the basement. 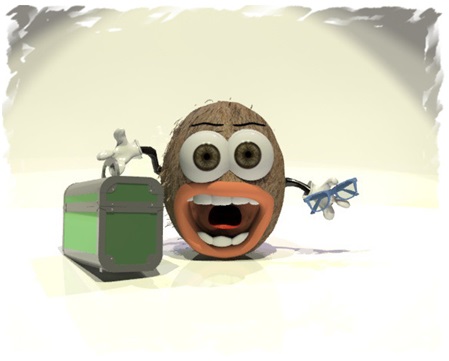 One day that she realized she was running out of countries to visit, she bought a big album and decided to sort her photos. She then fetched the box from the basement and laid out all the photos on a big table. The other fruit and vegetables of the garden were so impressed that they gathered around her and started asking her questions. “Tell us which country is the most beautiful in the world!”, they wondered.

“I think Italy!”, she replied and showed them a picture of her smiling in front of the Colosseum. She then gathered all the pictures she had taken from that trip and placed them on the first page of the album, as Rome had the first place in her heart. “I had such a great time in Rome!”, she told them as tears flooded her eyes.

“Coming to think of it, Canada has such colorful landscapes!”, she went on after a while, showing them a picture of a beautiful lake with crystal waters and mountains covered with snow in the background. She then gathered all the photos she had from Canada and placed them in the second page of the album.

“Well, Thailand is also beautiful”, she told them next and pointed to a photo of beaches with clear waters, golden sand and palm trees, placing all the photos she had from Thailand in the third page of the album.

Not really being able to make up her mind, she gathered all the photos from all the cool places around the world she had been to and placed them inside the album, until there was no picture left on the table. As she grabbed the empty box to take it back to the basement, however, a forgotten photo that fell on the floor caught her attention.

After looking at it in great detail, she sighed with nostalgia. “I think I’ll put this one on the album cover”, she told the other fruit and vegetables.

It was a photo of a sunset in Oia, Santorini.