THE MYTH ABOUT HOW ODYSSEUS got away from the Sirens and their enchanting singing with which they trapped unsuspecting travelers, by tying himself to the mast of his ship, is well known. 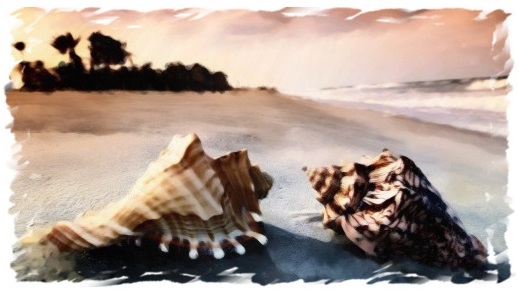 What is less known, however, is that during the course of his voyage Odysseus also met a beautiful mermaid, that is, a nymph of the seas, whose body was half human and half fish. Having heard that this rare creature is related to the siren, Odysseus wanted to hear the same beautiful song he had heard from the sirens once more. So, he visited the mermaid along with his soldiers in her cavern, in a small island in the Ionian Sea.

So enchanted was he by her song, that he wanted to take her with him on his travels. As she was half-fish, however, she couldn't leave the safety of her cavern, as humans would surely hunt her and kill her. Their love was doomed, and for that reason Odysseus kept his men on the island for as long as he could so as to hear her lovely song.

In the end, they got fed up and complained. The mermaid then gave Odysseus a magic shell, with which he could hear her singing whenever he wanted, simply by attaching it to his ear, so he could finally leave the island. So, they all departed and farewelled the mermaid.

One day that he was on the ship deck listening to the shell, however, a strong wave hit the ship and knocked him unconscious. No sooner had he regained his senses than he realized that the shell was nowhere to be found, as the waves of the sea had consumed it.

He cried day and night. Nobody could console him. The mermaid then appeared in his sleep and gave the solution: she told him he would be able to hear the same magical sound from any shell he found on a beach.

Since that time, it is rumored that should somebody move a simple shell close to his ear, he can hear the same enchanting melody that Odysseus once heard from the mermaid.