The teacher’s desk who felt uncomfortable

A teacher’s desk that lived in a classroom once felt very uncomfortable every time she had to go to the blackboard. “I’m scared that I will tell it all wrong”, she told the other school supplies and every time the teacher asked for volunteers, she shook with fear. Yet she was very studious, knowing more than anyone else in the classroom. 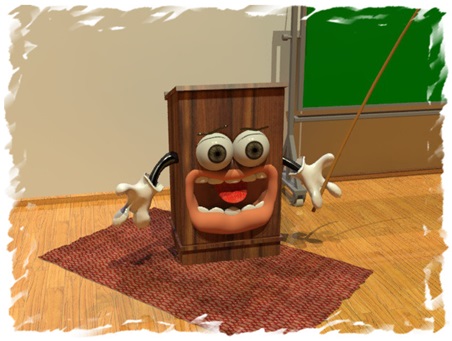 Until the day when the unexpected happened: the school supplies arrived on time, only to hear that their teacher was ill and there was no one to replace her. “Why don’t we ask the desk to be teacher today?”, the rubber suggested with excitement. “Since she knows everything so well, she could lecture us today”, she added, and the rest of the school supplies agreed.

“I’m really sorry… I just can’t…”, the desk answered as soon as they asked her. “No way! You’ll be our teacher for the day!”, they insisted, even seeming to be having fun in the idea. “If… you… insist…”, she told them in the end, and went towards the blackboard.

“Math is first on the schedule”, the desk said and grabbed a piece of chalk as the other supplies placed bets on whether she would stand up to the challenge. She then started writing the multiplication table, only to make a very small mistake a couple of seconds later, for which the strict rubber scolded her: “You’ve got it all wrong!”. She then starting shaking with fear.

“It’s best if we moved on to the next lesson then…”, the desk said to justify herself and glanced at the schedule to see what followed. She then took a sponge, erased the numbers that were on the blackboard, and wrote words and complete sentences in their place. The other school supplies took the grammar book out from their bags.

“The mouse went up the clock”, wrote our good desk on the blackboard, only to forget the dot at the end of the sentence. “You’re the worst teacher ever, as you forget half of what you’re supposed to teach us”, the rubber told her then and she burst into tears to hear it.

“It’s maybe best if I stopped then…”, the desk said, yet the other school supplies wanting to hear nothing of it. After scolding the strict rubber, they calmed the desk down and asked her to keep going. “I don’t feel comfortable enough…”, she told them and to justify herself, added: “the only subject I feel comfortable with is the last one on the schedule for today, History”.

“Then do as you feel best!”, the sharpener told encouraged her as the other school supplies agreed. And so our good desk gave it a final try. So well did she know History, however, that as soon as she went next to the blackboard, she felt very at ease. She taught the lesson with so much confidence that she didn’t even realize how quickly time went by. When at some point she mistakenly mentioned a different date than the correct one, so at ease was she with herself that nobody even took notice.

“Congratulations! You’re an excellent teacher!”, the other school supplies told her at the end of the lesson, giving her a big round of applause that made her feel very proud. “How about we go back to Math and Grammar now?”, they suggested and she accepted the challenge once more.

And so, for that day, the school supplies did the daily schedule in reverse order. After plucking up enough courage from the History lesson she had delivered, our good desk had gathered such moment that she even taught the other classes flawlessly. And so from that day she felt very comfortable every time the teacher asked her to walk up to the blackboard.

As for the strict rubber? Well, the next day that the teacher returned and examined her, she made so many mistakes that she acted as smart again.