THERE WAS ONCE AN APRICOT that really loved delicacies. He ate all sorts of sweets, from chocolates and pastry cakes to candies and candyfloss, and enjoyed them to the very last bite. But most of all he enjoyed donuts, with chocolate or strawberry cover, or without. 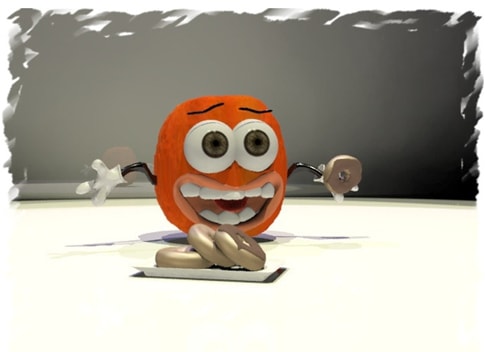 “Since you like sweets so much, why don’t you open your own pastry shop?”, asked him once a strawberry who also loved sweets but avoided them in order to lose weight.

“What a great idea!”, exclaimed the apricot, who thought that if he opened a pastry shop, he would have access to as many sweets as he wanted, anytime he wanted them. The very next moment however it came to his mind that he had no clue about baking and could not open a shop on his own.

Putting two and two together, he formulated a plan: he would buy the sweets from somebody else, then set up a stand and resell them. So it happened: he visited all the pastry shops in proximity, and after studying the various prices at which they offered their sweets, he chose the shops according to his best interest. He then took a cart and went to load it with fresh merchandise. At the sight of his favorite delicacy however, the donut, he found it difficult to resist, so he loaded the whole cart with donuts without really caring about the other sweets available. “If the other fruit and vegetables don’t like them, I’ll eat them all by myself”, he thought to himself as he went straight for the cashier.

As soon as he was back in the garden, he set up his donut stand under a tree with thick shadow, then started advertising his goodies: “Donuts, have your donuts…!”.

“The apricot is selling donuts…!”, wondered the other fruit and vegetables as soon as they heard his voice. “He probably ate as many as he could and wants to give the leftovers away”, they continued with reluctance, wondering whether they should buy or not, as the apricot had already earned quite a fame for eating everything before others could set their hands on them.

The donut then, seeing time was passing and nobody was coming, started to crave the donuts. “I’ll have just one”, he thought and took a bite. Then he took a second bite, and a third, until little by little the donuts disappeared from the stand. A few minutes later, when the first fruit and vegetables showed up as customers, they were disappointed with the sight.

“I unfortunately ate them all…”, said the apricot with his belly swollen. There was no single donut left on the stand.

As soon as the other fruit and vegetables realized what he had done, they burst into laughter. “You are so greedy you ate your own merchandise”, they told him, and the apricot became red with shame to hear their words. With his belly swollen out of eating too many donuts, he decided from that point on to eat fewer sweets.