The mushroom and videogames

A MUSHROOM that lived in a grocery store once loved videogames. While the other fruit and vegetables of the garden used to play outside, he would spend hours in front of the TV screen with a joystick in his hands till late at night. At times, he would often wake up early in the morning so as to have more free time for gaming within the day. 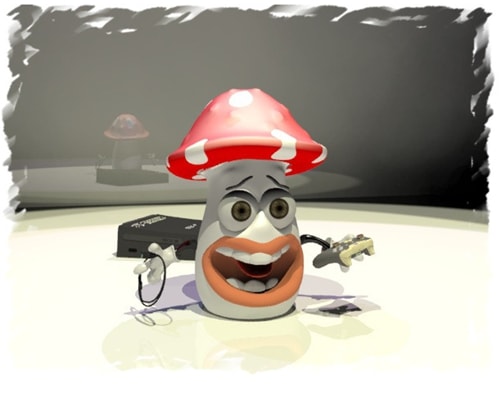 The mushroom and the broken console

"I love video games because they make my imagination travel to places I've never imagined existed", he told the other fruit and vegetables of the garden, who understood his passion for video games, but thought he would rather feel lonely. So the days went by, and the mushroom had learned all the cool gaming tricks by heart and would only seldom turn the console off to talk to others.

Until finally one day, when the gaming console wouldn't start, and the TV screen only showed an empty black frame. Our good mushroom was so anxious that he started hitting the buttons of the controller with strength, hoping that some miracle would happen and he would soon return back to his favorite sport. To no avail however, as no other fruit or vegetable in the grocery store managed to power the console on.

"Maybe it's time for you to decide what other hobbies you like", told him the banana, who used to dance her problems away in her free time.

The mushroom started having second thoughts. Seeing that the console wouldn't get fixed soon, he asked the other fruit and vegetables what they liked to do when they were not doing their homework.

"I like running", replied Linus the cabbage, who often took part in sprints and marathons. To put their agility to the test, they both gave a sprint around the garden.

"I also like working out", told him the radish who frequented the gym. So they both went for a workout, lifting weights and doing sit-ups.

"None of these activities made my imagination travel to magical places", said the mushroom, disappointed and tired from the effort. "These are not for me...", he continued.

The parsley then, who was a well known actor with experience on the theatrical stage, asked him to take part in his new theatrical play. "Together we will travel to the land of imagination", he told him, and suggested they work on The Little Prince by Antoine de Saint-Exupéry. As soon as they set their foot on stage, they indeed travelled to all the imaginary lands the great author had built with his mind. They laughed, cried but also sweat along with the other troupe members so as to perfect their roles, until the day when they put on the show came. Our good mushroom finally felt he had found a hobby to satisfy his tastes.

"I travelled with you, but felt little loneliness this time, unlike playing videogames...", admitted the mushroom right before the show began. In the end, and after giving their best selves on stage, the other fruit and vegetables of the garden who had come as spectators gave them a big round of applause.

"Theater has won me", admitted the mushroom and from that point on decided not to bother with video games any more. He even gave a big laugh, as soon as he realized the gaming console was not broken in reality, but rather that the other fruit and vegetables had pulled the power cable so as to give their good friend a push to understand how he truly loved to spend his time.