The potato that came from America

THERE WAS ONCE A POTATO from the United States that wanted to visit Greece and stay permanently. As that was a very long time ago however, there were still no potatoes to be found in Greece, as the specific vegetable thrived only in America. So anxious was she that by coming to Greece she would feel lonely and unwelcome, that she thought of writing a letter to the then Governor of Greece, Ioannis Kapodistrias. 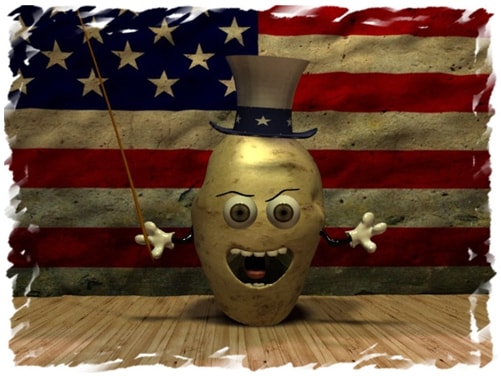 The potato that came from America

"Most Honorable Governor", started the letter, and continued: "I come from the United States but I really love Greek culture and would like to visit the Acropolis. Should I find your country hospitable, I may want to stay permanently".

The clever Governor then grasped the opportunity. He sent a personal invitation to the potato, explaining to her that Greece is always sunny and she would surely love to stay forever.

Holding the invitation in hand, the potato took a ship destined to Greece. After travelling for many months, she eventually reached the port of Piraeus. When the guards asked her for her papers, she showed them the invitation and said: "I was invited here by your Governor, Mr. Ioannis Kapodistrias".

She then travelled to Athens and visited the Acropolis, where she basked at the glory of Ancient Greece. So much did she love the sun and the islands that she eventually rented a small flat in the center of Athens, with a view of the Acropolis, so as to stay for as long as she wanted. However, she was soon sad to realize that everybody was looking at her with suspicion, and treated her as a foreigner, avoiding her company. Every door she knocked, she only knew rejection.

So she thought of visiting the Governor himself, who was located in Nafplion at that time, and explain to him that she was so let down by the inhospitable Greeks that she intended to go back to her country. To cajole her, she told her: "Greeks treat foreigners with mistrust, but they can’t resist foreign shows".

They then formulated a plan: they would set up a big Circus tent, and ask the other fruit and vegetables of the garden to help the potato stage a big spectacle. They would do the acrobatics and magic tricks, and the potato would be the big presenter of the show. The Governor made sure that every single local was invited and they were all made aware of the grand show. So it happened.

The big night the Circus tent was crammed full of people who waited with impatience to see the foreign show their Governor had promised them. The potato then appeared on stage, and presented the numerous acts one by one, switching between the Greek and the English language on occasion, and the fruit and vegetables of the garden made their best to perform as best as possible. There was no single person not to be amazed at their talent, and in the end, they all burst into applause. They welcomed the potato and apologized to her for not being hospitable from the beginning.

From that point on, she decided to stay permanently in Greece. In turn the Greeks love her, grow her in their gardens, and made it part of every local dish tourists enjoy.