Fruit and Vegetables A' - MoonFlake.com

AN OKRA that lived in a grocery store once was very studious. So much did she love her books that she barely ever had time for the jokes of the other fruit and vegetables. From their side, they thought of her as a model student, but would avoid making jokes around her as they feared she had lost her sense of humor and would not laugh. 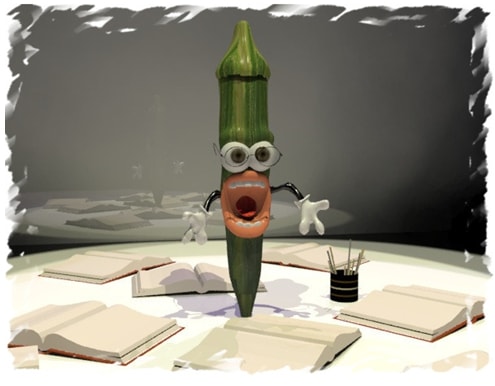 One day however, our good okra received an invitation by the zucchini to attend his comedy show. “I would really like you to attend, as I will be the comedian of the night”, the invitation wrote. The okra unwillingly accepted the invitation and made sure she would not have homework to do that day, so as to be able to attend.

When the time for the show came, she sat on her chair saying little and waited for the zucchini to show up. Only a few minutes later the comedian made a show of his entry, headed for the stage amidst applause, and started telling anecdotes and funny stories which he had learned by heart. Soon enough every single fruit and vegetable burst into laughter. Everyone, spare the okra, who sat on her chair without smiling, as she would not get the jokes.

The zucchini then, finding it really strange that every other fruit and vegetable was laughing at his jokes, asked the okra to join him on stage. “Would our fair lady, the unsmiling okra, be our guest for the night and come to the stage with me?”, said the zucchini through the microphone. With great hesitation the okra then stood up from her chair and made it next to him.

“Did you not like any of my jokes today?”, asked the zucchini.

“I found them rather tasteless”, the okra admitted.

“Like… okras?”, said the zucchini, poking fun at her. On one hand, she went red with shame just to hear it. On the other, she found it rather funny, and burst into such a big laughter that no one would stop her. Along with her laughed the other fruit and vegetables of the grocery store that were watching the comedy show.

“Bless you for making me laugh!”, admitted the okra, then went back to her chair to see the rest of the show.

So much did she enjoy remembering how to laugh that night that the very next day she went to the bookstore and bought a whole book of anecdotes to read every time she would take a break from her homework.