The teacher who knew everything

ONCE UPON A TIME there lived a poor farmer, who made his living out of carrying firewood to the village with his two oxen. One day that he visited the teacher of the village, however, he got very jealous of his education and all the books that were sitting on the bookshelf. So, he asked him if he could be a teacher himself, that is, to know all that a teacher does, which is everything. 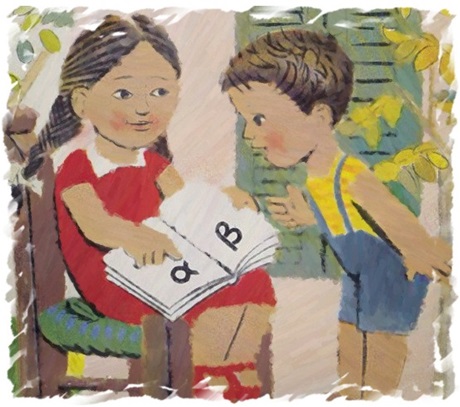 "Definitely", the teacher told him, "and in a very short matter of time, actually"

"What should I do?", the villager asked him back.

"First of all, you must buy an alphabet book. Then you must sell your carriage and oxen and buy a blackboard with chalk instead. Then rub your hands with the chalk and always walk around like that so as everyone can see how white they are. Last but not least, make a sign with the words: 'The teacher who knows all' and hang it outside your house".

The villager did everything, exactly as the teacher told him. His wife, however, Grete, started mocking him, as he was nothing but an illiterate peasant who barely even knew how to count. The peasant was so stubborn however that still wanted to prove her he knew all.

Years later, it so happened that a large number of gold coins were lost from a rich man's house. Somebody told him about the teacher who-knew-all and suggested that maybe a man so educated as him could help him find the money. So, the rich man rode his carriage to the village and asked for that very special teacher.

"I want you to come with me and help me find who took my gold".

"I'd be happy to, but I'd like my wife, Grete, to come along", the peasant told him.

The rich man agreed and put them on the carriage. Together they reached the rich man's palace, who invited them for lunch. "I'd like my wife Grete to join the table as well", the peasant said and they all sat together.

When the first servant brought the plate, the teacher whispered to his wife: "Grete, this is the first", wanting to show her how well he knew how to count.

The servant, however, who was the culprit behind the theft along with the over servants in the Palace, mistakenly thought that the teacher knew everything. He started shaking with fear, admitting before his comrades: "The teacher knows it all. He said before everybody but I am the first".

The second one entered the room reluctantly, as he was also fearful. As soon as the know-it-all teacher saw him walking in the room with a plate full of meat, he whispered to his wife: "Grete, this is the second".

The third servant got so fearful, however, that he skipped his turn. In his place went the fourth servant who entered the room carrying plates filled with dessert. When the peasant, who was still not very good at counting, saw him walking in, he got confused and told his wife: "Grete, this is number four".

The servant got so scared after this that he asked the peasant to go outside. The four of them admitted they had stolen the coins, and asked him to strike a deal: he was to tell nothing to their master so that they would not be punished, and they would show him where they had buried the coins. So happy did he get that he would have the chance to prove himself right in front of his wife, that he instantly agreed.

As soon as he got back to the table, the rich man told him: "Since you know it all, can you tell me where my coins are to be found?"

"And now", the peasant said, "I will look in my book to see where they are hidden". The then took out a big alphabet book from his bag and searched the pages one by one, until he found one showing a tree in the garden. He showed them to the rich man, then took a shovel and dug in the tree's roots until he found them buried underneath.

And so, the peasant told the rich man where the coins were to be found, with no mention of who buried them there. Not only did he take a big reward out of the agreement with the servants, but he also became known as the 'know-it-all' teacher.