Red hair and the Rambutan

AN EXOTIC FRUIT that came from distant Indonesia happened to visit our country and our well-known garden. The other fruit and vegetables gave him a warm welcome, and made him feel like home. "What is your name and what do you do for a living?", they asked. "My name is Rambutan and I am a hairdresser", the fruit replied as fruit and vegetables started laughing at his red hair.

"The hairy Rambutan opens his own hair salon"

Yet, the Rambutan thought of making his dream of opening his own hair salon in Greece. "There's my real chance to get rich!", he thought, then bought scissors, combs, a hair-dryer, as well as all the necessary furniture to start his own business. To even find proper shelter for his salon, ne rented a nice, comfortable space inside a tree hollow.

To his surprise, no one showed up in the grand opening of the salon. Even in the following days, no customer appeared on the door. "What might be possibly wrong?", the Rambutan wondered and thought of asking the kiwi, who had gained quite a fame for opening his own successful business as a hairdresser and had closed his salon as soon as he had saved enough money for the rest of his life.

"It's not you. It's the fruit and vegetables that are having a difficult time accepting anything that is different", the kiwi explained with tears in his eyes as he remembered he had been mocked due to his hair. "Yet if you manage to persuade them that something is in fashion, they will flock to you", he added and then followed it up with the story of how he setup his own hair salon.

So our good Rambutan thought of a trick so as to persuade the other fruit and vegetables to trust him. He thought, that since he had naturally red hair, he should use posters with famous red-haired stars to advertise his hair salon: Ariel the little mermaid, Princess Merida, or even Quasimodo. Big letters could be seen below the poster: "Transform yourselves!"

The other fruit and vegetables went mad to see the poster, forming huge crowds outside his hair salon. Soon our good Rambutan had so many customers that he barely ever took a break, and the garden was filled with fruit and vegetables with dyed red hair that were very mindful of their appearance. "He is an excellent hairdresser!", they told each other, advertising his skills instead of mocking him as they did before for his natural red hair.

Soon our good Rambutan managed not only to cover his expenses, but also to make money with which he bought permanent residence in Greece, as with his work he gained not only money but also recognition. 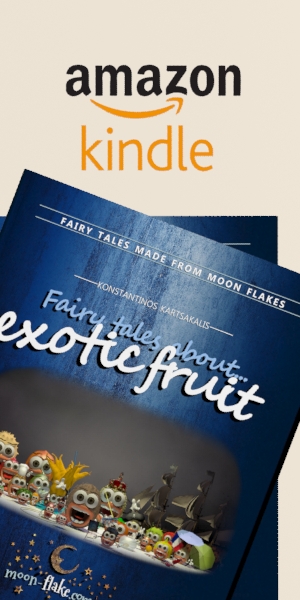