The sunbeam and the prisoner

IT'S FINALLY AUTUMN. The shores of the stormy sea can be found on one side. The numerous ships that have dropped their anchor at the port are rocked by the waves hitting them mercilessly. On the other side, lots of trees with yellow leaves, many of which are torn from their branches and cast forcefully on the ground. Only a few meters along the way, in the basement of a stone wall, a building with huge bars blocking its windows is seen. Only light can pass through the opening of the iron bars. 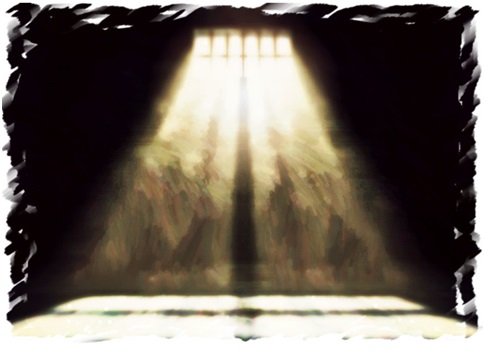 The cruelest criminals are guarded in the basements of this prison, far from the rest of society. God, however, sends his light for both the good and the wicked, and so, a sunbeam enters the room, filling it's with bright sunlight. The thief that lives in the cell is shocked as he lets his tired body to rest against the wall. A small bird, a nightingale, then approaches, and is bathed in the light of the beam. It then sings a few notes to cheer the man up.

The mean, chain-bound criminal opens his eyes and stares at the bird with wonder, only to follow it with a smile. It's Autumn outside, but the only thing that occupies his mind at the moment is Spring with its beautiful flowers.

He takes a step towards the bird, only to hear the distant sound of a guard's horn that alerts the bird and makes it jump to escape its fate. He then closes his eyes and lets himself go, hiding his face. The bird flies away as the thief feels the sunbeam disturb his closed eyelids with its warmth.

He opens his eyes once more, this time to enjoy the sunbeam. The silhouette of the nightingale can be seen through the sunlight that floods his sight. The bird returns, carrying something with its bill. Much to the thief's amazement, it's a beautiful red rose, filled with dew, which the bird leaves on the window.

The thief grabs the flower and lets its beautiful scent fill his nostrils. The beam is lost once more, along with the nightingale, which now departs for foreign skies. The thief's senses are lost in the beautiful smell of the rose. Even though it may be Autumn outside, Spring has just arrived in his heart.