The harp that wanted to be a soprano

A HARP that once lived in a music school had a big dream: she wanted to be a soprano and sing in the opera. "I want to be like Maria Callas and be applauded by all", she used to say and listen to old discs of the famous singer with the moonlight to keep her company while everybody else was asleep. 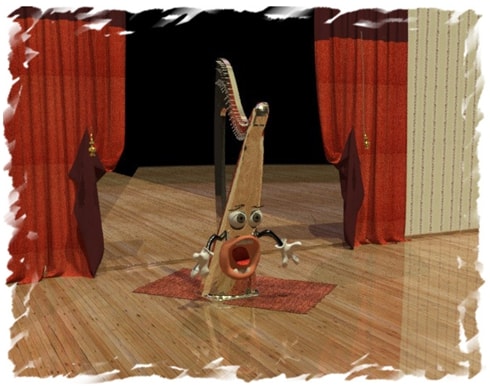 And she had a very good voice indeed, which she was however afraid to use in front of the other musical instrument: guitars, violins and drums, as she lacked confidence, thinking that she didn't have the talent required to put on a show. So, the days passed and our good harp left her dream unrealized, preferring to sing all alone at night when there was nobody to hear her. One night, however, the piano happened to pass by her room, who heard her song and knocked on her door.

"What a beautiful voice you have! Why not sing something in front of the other musical instruments for a change?", he curiously asked back. The next day that she appeared in front of a crowd, however, she started trembling with fear, to the point that she only managed to sing one or two verses of a much beloved song and then drop silent. Seeing her courage, the other musical instruments gave her a round of applause and encouraged her to continue. "If you try really hard you will make it!", they told her.

She then went back to her room and cried. A few minutes later, and after her tears went dry, she put on her favorite Maria Callas record on the cd player and sat close to the open window to get some fresh air. A nightingale then, which was sitting on a tree branch nearby, approached her and started whistling.

"How wonderful it is that you control your beautiful voice without showing any signs of fear or shame in front of others", the harp told the nightingale as she swept her last tears.

"A true soprano is first an actress and then a singer", the nightingale answered. "First then, you must learn to control your body. And only then can you control your voice", it added and flew away to the nearest branch, then hopped from branch to branch with grace. And what a beautiful sight the singing nightingale in the moonlight was! The same night that the harp went to bed she kept thinking of the nightingale's words and when she finally fell asleep, she dreamt that she was in a grand opera house giving a spectacular performance all by herself.

The next day, she climbed on stage and sang "Carmen" from Maria Callas to other musical instruments. "I'm first an actress", she thought to herself and started moving around the stage with rhythm and grace. "And then a singer", she continued and as soon as she felt comfortable hearing the melody of the song, she complemented her dance with her singing. She did so well that the musical instruments kept staring at her, unable to believe their very own eyes. "You lady are a true Soprano!", they told her, congratulating her on her progress. And she felt really proud for her achievement, as she had finally managed to perform in front of a crowd.

Many years later, our good harp became a renowned singer in the famous La Scala Opera House in Milan.