The witch and the white crow

ONCE UPON A TIME in a forest far away there lived a family of black crows that were very proud of their race. Their life passed smoothly and the mother crow kept hatching her eggs with great caution. The day that they cracked their eggshells to come out, however, something unexpected happen: one of them was born with white feathers.

The mother and father crow were very ashamed of their white little crow-child. The days would pass and the crow’s siblings grew strong, black feathers, whereas the small crow didn’t even have a black spot. The other crows mocked it “the white sheep of the family”, avoiding its company at all costs as it was so white that it reminded them of a pigeon. 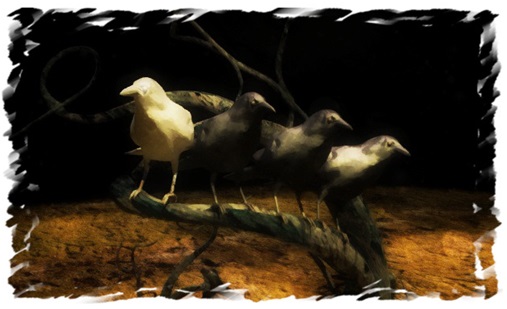 And so one day, the disappointed white crow decided to leave. It opened its wings and flew away, passing above fields and forest, valleys and mountains. It flew so far away that it could barely even see its house on the horizon, and no matter how many times it looked back there was no one to come after it. When it stopped in a river to drink some water, however, a hunter trapped it with his net, caught it and put it in a small cage with other exotic birds. He even found it extremely strange that such a rare tree was to be found in the forests where he kept hunting.

The next day, the hunter went to the market to sell his merchandise. Lots of customers flocked to his bench to see the birds he was selling, and he soon managed to sell everything off, except for the white crow, which everybody kept staring at, yet nobody wanted to buy. The hunter got really curious and thought that he would have a really hard time finding a buyer for such a rare breed.

He then thought of the following trick: he bought black paint and painted the feathers of the bird in that color. When he finished his work, the crow looked as black as every other, giving no hint of its real color. So, he went back to the market, and no sooner had a couple of minutes passed than an ugly witch appeared, who purchased the bird and paid a high price for it.

She took it home and after placing it in a rusty iron cage, she started brewing all sorts of potions and casting spells. From the very moment she took the crow to her home, however, everything started falling apart: her spells became powerless, her potions were like water, and her curses turned back on her. Her clients started calling her “useless” and asking for their money back. If she went on like that, she would soon run out of business.

She then angrily caught the crow from its legs and started squeezing it. As she let her hands touch it, however, she noticed that the bird was painted and that the black paint was coming off. Terrified, she threw it on the bathtub and washed it with water. As the black paint was dissolved in the water, however, something unexpected happened: the gray hair of the witch turned blonde, and the wrinkles on her face disappeared. Her clothes became bright and colorful, and joy filled her heart, as the curse that had turned her into a witch many years ago had just dissolved.

The princess then understood that this very special bird, the white crow that no other bird in its family wanted, would bring her magic happiness and youth forever in her life. To thank it, and after throwing away all the potions she had been using as a witch, she made a cage for it made out of pure gold.