The mouse that married the rainbow

ONCE UPON A TIME IN JAPAN there lived a mouse with his wife, who both came from aristocratic families. They had a daughter together, who was the most beloved mouse in the whole mouseworld. 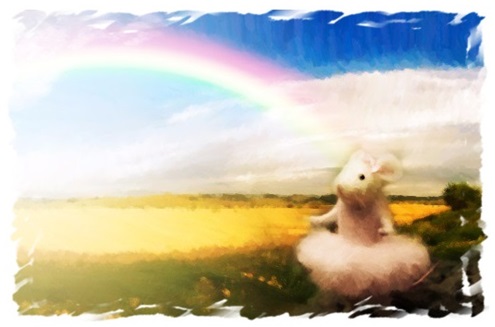 Her parents were very proud of her, and made sure they taught her everything they knew. There was no other mouse in the country to be compared with her intelligence and her ability to chew even the toughest of wood, or that could fall from such a big height on a bed, or evade traps and ran away from cats like she did. Great attention was also given towards her appearance: her skin was shining like silk and her teeth beautiful like pearls and sharpened to perfection.

But her parents also demanded that she have an equally perfect marriage, and as she grew, they started searching for a proper groom. Her father, who was of noble lineage, wanted her daughter to marry a nobleman: someone young but with a long beautiful moustache that would reach the ground, from a family at least as royal as his own. Her mother, who thought all this royal ancestry concerns were nonsense, had her own vision about whom her daughter should marry.

"We should aim high", she said. "High till the sky and the moon, as our daughter is a shining star". So, they spent days fighting with each other as to whom their daughter should marry, not really caring about her own opinion. She, on the other hand, wanted to marry no one, and stick to chasing her dreams.

"My daughter's beauty is not to be compared with anything on earth", her mother used say, until one day the father replied: "why not give her the Sun as her husband then?"

And so, they both agreed to offer their daughter as bride to the Sun. After spending countless hours to get ready, they grabbed their daughter by the hand and went to meet the Sun. Reluctant as she was, she agreed to go along if only it would make them stop fighting. The trip took a long time, but in the end, they reached a magnificent Palace made of gold in which the Sun lived.

"Noble Sun!", said mama mouse, "behold our daughter! She is so beautiful that her beauty is nothing to be compared on earth. So, we brought her to you as a bride, as you shine bright in the sky".

Then the Sun, who had little need of marrying, replied: "I'm very honored by your words and your offer, but it would be unwise for me to take advantage of your lack of knowledge. There is something more important than me in the sky, and it is the Cloud, as when it covers me, my rays cannot shine on earth".

And as the Sun spoke, a cloud happened to pass from right in front. The daughter was then relieved as the Sun hid behind the Cloud. Mama mouse then said: "Let's give our daughter's hand to the Cloud then". And turning her back on the cloud repeated her proposition. The Cloud then replied:

"I'm not really worthy of a creature so beautiful as your daughter, as there is something stronger than me, and it is the Storm. While a Storm rages, I slowly fade away until I'm dry and dissolve in the sky".

No sooner had the cloud finished his phrase and the first raindrops fell. Within a few moments it started raining, and the rain soon became a storm. Mama mouse lost little time, and repeated her proposition, this time to the Storm. Not wanting to marry the Sun, the Cloud or even the Storm that cast its thunder and lightning on earth, the daughter raised her eyebrows.

The Storm then replied: "You're right, as I might be the ruler of the skies, but as soon as I fizzle out the Rainbow takes my position".

"The Rainbow?", exclaimed the daughter who had remained silent all this time. No sooner had she uttered the words and the Storm was over, getting replaced by a bright, colorful rainbow that mama and papa mouse couldn't keep staring at. With little thought, the daughter jumped on the rainbow and left for the skies, happy that instead of getting a groom she would be free to hunt her dreams.