The watermelon that was afraid of singing in front of others

ONCE UPON A TIME in a grocery store there lived a watermelon that had great talent in singing. Despite his talent however, he really lacked courage and was very shy in front of others. He would sing softly to the melons on the stand during daytime, but as soon as the grocer would appear, so ashamed would he get that he would immediately close his mouth. Then again, during night - time when the grocer would leave the store, the watermelon would pluck up courage and wake the other melons from their sleep with his songs. 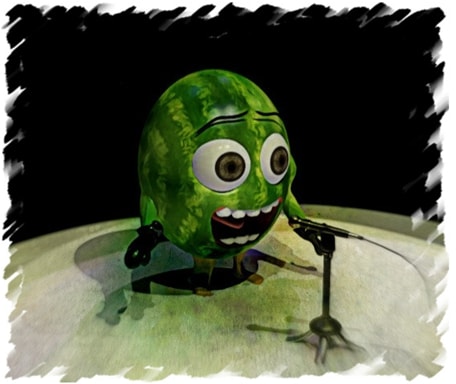 Until one day, the melons coordinated with each other to teach him a lesson. After having tolerated his mumbling for the day, they waited until it was finally night and the grocer closed the lights and left. Then they pushed him on the weighting scale and asked him to sing in front of the other fruit and vegetables of the grocery store, so he would finally get the attention he craved. He accepted the challenged, stepped up on the scale, but quickly became red with shame and unable to utter a single word.

Then a brave parsley, who really loved to be applauded and looked at with marvel, stood up and sat on the scale, next to the watermelon. Turning the lights on him, he grabbed the microphone and started uttering the words of a popular song, one by one. After a while, the watermelon found the courage to follow him, and the parsley went silent so as to give him space. Everything went perfect for a moment, until the watermelon started to once more lose his words and feel ashamed. Then out of nowhere, and as he started sweating with anxiety, a fly hovered around him and sat on his forehead. Every single fruit and vegetable in the room burst into laughter with the sight. The watermelon was speechless.

Suddenly the grocer approached the room. who woke up in the middle of night believing that some thief had sneaked into his grocery. As soon as the fruit and vegetables heard his footsteps, they switched off the lights and quickly returned to their positions in their crates so as to go unnoticed. The grocer lit the room and was really surprised not to see anyone. So angry was he to see the fly however, that he immediately took a flip flop to drive it away. The watermelon was so scared that the fly was sitting on his forehead that his heart started to beat with anxiety.

As soon as the grocer closed the door and the lights went on again, the brave parsley once more stood up and grabbed the flip flop, which this time he used as a metronome, hitting it on the scale with rhythm. Hearing the rhythmic beat, and after the shock he had lived through, the watermelon this time loosened up and started to sing with poise. 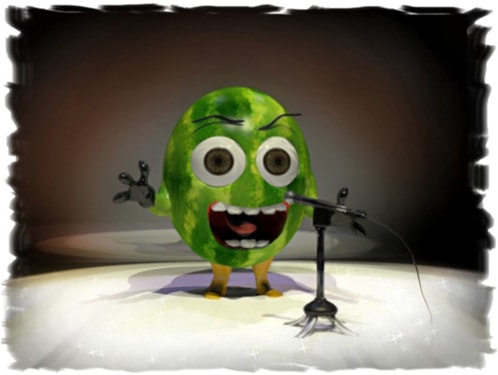 For a second time the grocer heard the noise and entered the room, but this time the fruit and vegetables were so happy to hear their good friend sing that they didn’t take notice so as to hide. The grocer was then met with a spectacular sight: every single fruit and vegetable in the store had gathered around the scale, on which sat the parsley and the shy watermelon with the microphone, giving a monumental performance this time.