The whiteboard that didn’t learn from his mistakes

A whiteboard that once lived in a classroom always made the same mistakes over and over. “This is what we have the sponge for”, he used to say, “so we can easily correct our mistakes”. And so, every time the other school supplies notified him of mistakes he made while writing with the marker, he quickly used the sponge to erase it and wrote on it anew as if nothing had happened. 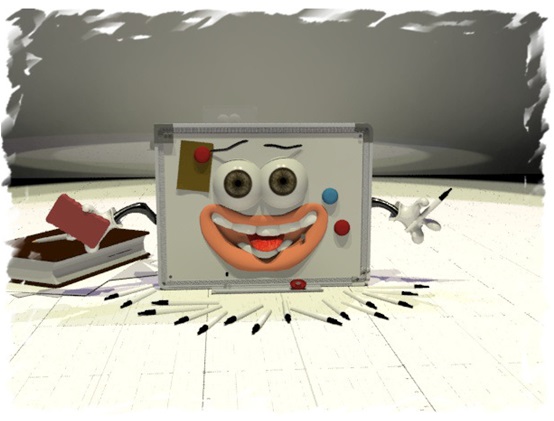 "You'll keep repeating the same mistakes over and over this way", the correction fluid, who hated mistakes, told him one day. Our good whiteboard didn't seem bothered in the least, however. “The fact that I keep making mistakes doesn’t mean I don’t learn from them”, he justified himself.

So, when one day he wasn't paying attention, the other school supplies thought of challenging him. They replaced the black marker he was using with an identical one, which however contained permanent ink instead and whatever he wrote wouldn't go away by using the sponge. This way the mistake would stay there forever so as to teach him. So it happened.

“Show us you know the alphabet”, they told him, and after making sure they had placed the permanent marker in the right spot, they added: “If you write all the letters correctly and in the correct sequence, we’ll buy you a new notebook as a gift!”. The whiteboard accepted the challenge and started drawing the shape of each and every letter, one by one. As soon as he reached ‘g’, however, he mistakenly wrote ‘i’ next to it instead of ‘h’.

“I’m sorry…!”, he said as soon as he realized something was wrong and then took the sponge to erase it. Much to his surprise, however, the mistake wouldn’t go away, no matter how hard he rubbed the sponge on it. Instead of erasing the letter he then thought of drawing on it, so as to make it look like an ‘h’. “Just like it never happened!”, the whiteboard told the school supplies, who laughed at how easy he had fixed his mistake, and then went on with the rest of the letters.

Only a few seconds later, however, and when he reached ‘p’ he mistakenly went straight to ‘r’ and skipped ‘q’.

“Easy to fix!”, the whiteboard exclaimed, then converting the ‘r’ into a ‘q’ by adding extra lines and making the shape rounder. “Done”, he exclaimed, and the school supplies got really curious as to whether he would be able to keep on correcting any mistakes he made from that point on with the same ease as before.

When he finally reached ‘y’, the time came for the last letter of the alphabet, which is non-other than ‘z’. So anxious did he get, however, as to whether he would win the bet, that he started shaking.

“This means that if I am wrong it will stay there forever?”, our good whiteboard asked, shaking with fear. He then reached for the marker, and started drawing a straight-lined ‘z’ so as to complete the alphabet. As his hand trembled with fear, however, he stopped just as soon as he had finished the top line.

“You can do it!”, the school supplies shouted at him as they saw him struggling to complete the task. After plucking enough courage, the whiteboard touched the surface with the marker once more. The very last moment, however, he clumsily dropped the marker on the whiteboard.

“The marker is dry!”, the whiteboard exclaimed with relief, seeing he had not made any smudge whatsoever. The other school supplies then agreed to help him by handing him over the regular marker so as to complete the alphabet he had been so diligently writing. The whiteboard completed the last letter.

“It’s wrong!”, the other school supplies exclaimed, seeing he had drawn an ‘s’ instead of a ‘z’. “You ‘re right!”, the whiteboard exclaimed and quickly erased the letter with his hand, making a smudge. “It’s ok, you don’t have to fix it”, the school supplies told him just as he was writing the correct letter, so as to reward him for his courage.

And so, the alphabet was left unfinished and the school supplies got back to their play, as they realized that what mistakes are there to best serve as lessons, whereas what is correct stays there eternally.