Plastic bags and the green bean

THERE WAS ONCE A GREEN BEAN that used to buy plastic bags to carry all the things he bought from the super market: from food and household stuff, to toys, notebooks, paints and sketchbooks. As soon as he went back home however, he would not keep the plastic bags for later use or recycle them, but rather throw them away in the trashcan and buy new ones the next time. 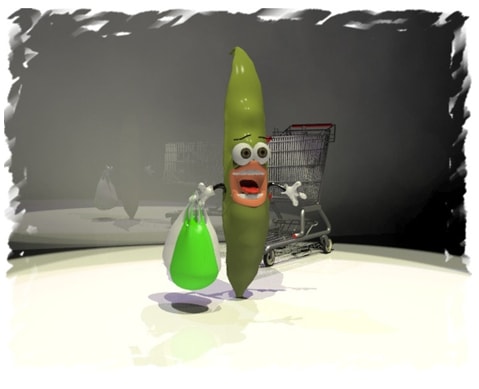 One summer however, the fruit and vegetables of the grocery store decided to go to the nearest beach for a bath. Along with his beach umbrella, his swimmies and his bathing suit, our good green bean thought of bringing along some food for the day. He then grabbed a plastic bag, filled it with a few sandwiches, and walked to the beach along with the other fruit and vegetables.

As soon as they set their feet on the warm sand, the fruit and vegetables started enjoying the sun and playing around. Our good green bean sat under the parasol and grabbed the sandwiches he had brought along, then offered them to the other fruit and vegetables. The very same moment the wind blew and carried the empty plastic bag many meters away.

The green then started chasing the plastic bag around the beach. No matter how hard he tried though, the wind blew even stronger, throwing and tossing the plastic bag even farther away. A few minutes later, the green bean had traversed half the beach going after the bag.

When he finally made it, he was so far away from the starting point that he found himself in different beach than the one the other fruit and vegetables were swimming in. No sooner had he held the plastic bag firm in his hands, than a foul stench reached his nostrils: the beach was full of rotting plastic bags and other trash, most of which were melting under the hot sun. The wind that blew from time to time carried the pieces of the molten bags straight into the sea. Our good green bean was so terrified that he immediately went to tell the other fruit and vegetables, holding the plastic bag firmly in his arms.

As soon as he was back, he was even scared with what he saw: his friends were packing their stuff as the wind blew the litter from the nearby landfill straight into their feet. In the sea one could find lots of trash, along with plastic bags, empty glass bottles and packages that the waves pushed to the shore. 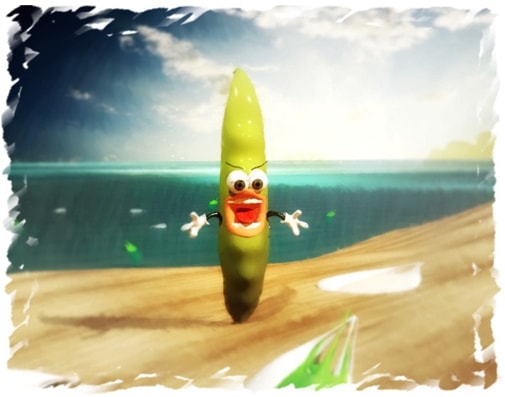 The green bean finds his plastic bag in a nearby landfill

“The water is full of plastic bags like the one you are carrying”, told him the apple with disappointment, and the green bean felt ashamed only to hear it. They then packed their bathing stuff and left for another beach that was safe and clean of rubbish.

From that day on, our good green bean decided to only use bags made from fabric every time he went to do the shopping. And should he really need to use a plastic bag, he made sure to recycle it the next day instead of throwing it to the trash can.