The grapefruit and the water pistol

THERE WAS ONCE A GRAPEFRUIT in a grocery store that really loved water pistols. Especially during summer time when it usually gets very hot, he made a bad habit out of loading his water pistol with as much water possible and sprinkling the other fruit and vegetables on the face. 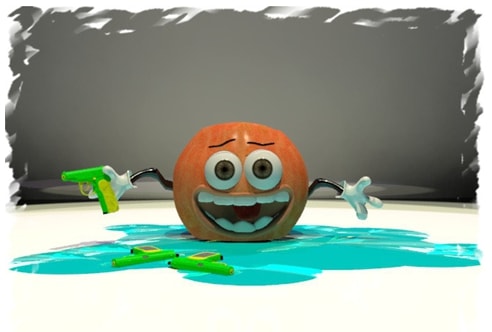 “It’s not a game when your target does not also carry a water pistol”, told him one day the melon with great distress. The grapefruit, however, was not moved at all. He filled his pistol again and splattered him on the face in cold blood. “This means war…!”, shouted the melon angrily and ran to fetch his own pistol from the drawer.

As soon as they saw them shooting water at each other, the other fruit and vegetables got so jealous that they too picked up their pistols, filled them with water, and joined the war. Soon enough the grocery store was filled with water, as well as fruit and vegetables fighting against each other passionately. The grapefruit was so excited with what he had caused that he shot water at every single moving target.

Everything was fine until the sensitive cherry plum, who was outside all that time taking a walk and did not take notice of what was going on, entered the room. The grapefruit then targeted him and pulled the trigger, only to realize that he had run out of water. The cherry plum however, who did not know whether the pistol was real or fake, got so scared that he burst into tears.

“Somebody stop him!”, shouted the melon, who realized that if the overemotional cherry plum, who could not help crying, did not soon stop, the grocery store would flood and they would all drown in his tears. The cherry plum however was so shocked that would listen to nobody, and kept on crying until his tears had formed lakes and flooded the grocery store to the level of the windows.

“Look at the terrible mess you have caused”, said the melon to the grapefruit sternly. Then, as soon as the other fruit and vegetables realized they would all soon need lifejackets, they threw away their pistols and picked up buckets and mops to clean up. After taking the cherry plum out of the grocery store, they calmed him down and reassured him that the pistol was a fake. With great effort he eventually stopped crying and the grocery store was saved.

As for the grapefruit? Well, he realized that every pistol, real or fake, is capable of bringing disaster.