The peach in the beach

THERE WAS ONCE A PEACH that loved the summer and the sea. “It’s my favorite time of the year, since I have no school and no homework to do”, he would say, never to lose a chance to go to the nearest beach and play water sports. And so the days would pass, and the peach would not hear a single word about school. 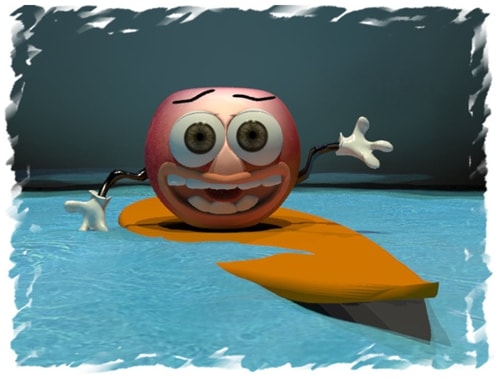 The peach rides the surf board

Until one day, like all the others that he went to the beach for a morning bath, when he was met with a sight that puzzled him: a group of watermelons had set up a shack, and put a sign that read “SURF SCHOOL” right above the door. Inside the shack they had placed lots of surf boards along with a chalkboard on which a huge wave and a surf board were sketched. Our good peach was excited to learn surfing but deeply troubled at the same time, as he wanted nothing to do with school.

“Like in school, here we learn how to ride the surf board”¸ a watermelon told him, explaining to him that he had completed a whole course in surfing, and knew how to ride the board with grace. Then other fruit and vegetables, carrying surf boards in varying sizes, closed their notebooks and went for the waves to have fun.

“Nonsense…”, mumbled the peach who wanted to hear nothing of school and courses during summertime. Then, after making sure everybody was in the sea and there was nobody around to see him, he found a surf board in his size and tossed it in the water. As soon as he stepped on it, and while he was still close to the shore, he did his best to keep balance.

A couple of minutes later, and after managing to stay on the surf board without falling, he thought of showing off to the other fruit and vegetables. The very same moment a big wave rocked his surf board, throwing him off balance. Our good peach was so afraid that he instantly fell in the water to save himself.

“Help me, I’m drowning…!”, shouted the peach to the other fruit and vegetables.

“Not wanting a teacher to show you how to use the board is one thing. Not wearing swimmies is another”, told him the watermelon that he had spoken to before and with quick moves swam to his aid. The then welcomed him on his board and took him to the safety of the nearest shallow waters.

So our good peach got his first lesson without a teacher. The very next days, and after attending the surfing school with patience and discipline, he managed to ride the surf board so well that in the end he found himself teaching others.