THERE WAS ONCE AN ARTICHOKE in a grocery store that really loved art, from handicraft and clay sculpture, to painting, dancing and theater. As much as she loved art however, she would get easily bored to do simple, everyday chores like sweeping the floor or doing the dishes. “These are not for me”, she would say and every time she was given a task in the grocery store, she would throw in the towel or put someone else in her place. 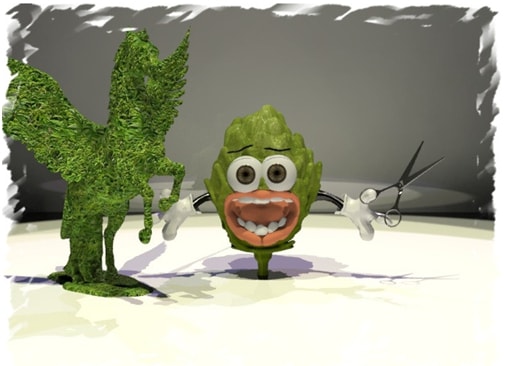 And so things went on, until the day when the fruit and vegetables of the grocery store finally decided to have a meeting so as to find a suitable chore for her. “She always neglects her chores to do handicraft instead”, complained the tomato, who really loved cleanliness.

“Maybe if she found something to do with art, she would not drop out on it”, said the pineapple, who sympathized with her love for painting. They then put two and two together, and decided to ask of her… to take care of the garden.

“We want you to turn the garden into a masterpiece”, they told her and handed over to her the mowing machine. “Since you don’t like chores, you can mow the lawn, trim the bushes and water the flowers, then show us what you did”, they added and also gave her a watering can and a pruner.

Not very happy to hear it, she started again to think ways of making short work of the chore. She watered the grass hastily, and then grabbed the pruner to take care of the bushes. “Well, they asked for a… masterpiece!”, she thought with enthusiasm as soon as she clipped the first leaf. She then thought of a horse and with great attention to detail started to prune the bush in the shape of what she had just imagined.

After finishing her first work of art, she moved on the next bush, which she pruned to the shape of an ancient Greek statue. Then on the next one, and the next, till the point when the garden was filled with bushes that looked like masterpieces. Soon the garden resembled a museum and the artichoke loved her creations so much that she wouldn’t even think of stopping.

Just before nightfall, the fruit and vegetables went to the garden to find her, believing she ran away without giving note. “From now on, we will not call it a garden, but a gallery, filled with works of art!”, she exclaimed as soon as she saw them, then toured them around the numerous exhibits, that is, the bushes she had pruned to resemble the pieces of art she had been studying in her spare time. When the tour was over, the fruit and vegetables of the garden were so excited with what they saw that they gave her a big round of applause.

From that day on, our good artichoke discovered her big passion: gardening. Every time somebody else would ask her to take care of the bushes, she would not let him make a step closer, as she wanted every single one of her creations to be under her own artistic care.