The fig that hated summer

THERE WAS ONCE A FIG that hated the heat of the summer, along with bathing in the sea. “Summer is not for me”, he would say, and wait impatiently for autumn to come. Every time the other fruit and vegetables of the grocery store headed for the nearest beach even, the fig would grab an umbrella for the rain instead of a parasol, and scare them with lame jokes about expecting rainstorms. 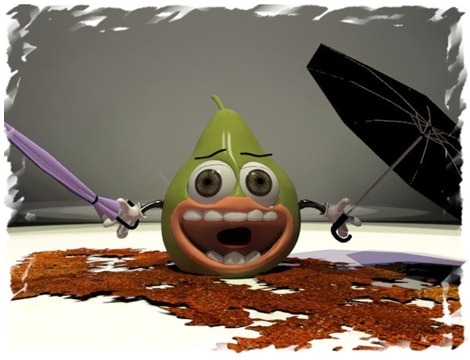 Until one summer, when quite by chance the sky was covered with gray clouds that poured showers all over.

“Doesn’t look like we’ll enjoy summer this year…”, complained the other fruit and vegetables, and were really let down to not be able to go to the nearby beach for a summer bath. When one or two actually made the attempt, they returned only a few minutes later dripping all over from the storm that was raging outside. So delighted was the fig with their hardship that would offer them his umbrella, only to piss them off.

“It’s about time you grew up!”, told him the peach one day, who was an avid surfer and couldn’t wait to ride the waves once again.

“There’s time left till August…!”, he replied, as it is a matter of fact that figs do not grow before the end of the summer.  How would they know however that August had finally come, with so much rain outside?

So one day, when the rain had finally subsided and only a few clouds were left in the sky, the fruit and vegetables decided to go to the nearest beach for fishing instead of a summer bath. They all grabbed their fishing poles, sat quietly on the shore, and waited patiently for the first fish to come. Soon enough, everybody had a few fish on their buckets. Everyone but the fig whose bucket was still empty.

“Everything in its time and… mackerel in August, as the Greeks say!”, told them the fig to justify his bad luck. No sooner had he finished his phrase, and a big fish pulled the other side of his fishing cord. So strong was the bite that the fig fell in the water with a big splash to draw the fish out.

“It’s a mackerel!”, exclaimed the fig as soon as he saw his prize.

“Then it’s August… about time you grew up!”, told him the other fruit and vegetables and burst with laughter. He became red with shame.

They all then sat in the beach, and as soon as it was night time they cooked the fish they had caught under the starlit sky, which was finally clear of clouds. Along with them sat the fig, who finally realized that there were very few more summer days left for him to enjoy.