The leek that took the toys of others

ONCE UPON A TIME there was a leek who made a bad habit out of taking the toys of other fruit and vegetables in the grocery store without asking. “I’ll just borrow them for a while”, he would say but instead of returning them after playing with them, he would forget them all over the place, thinking that nobody really cared. 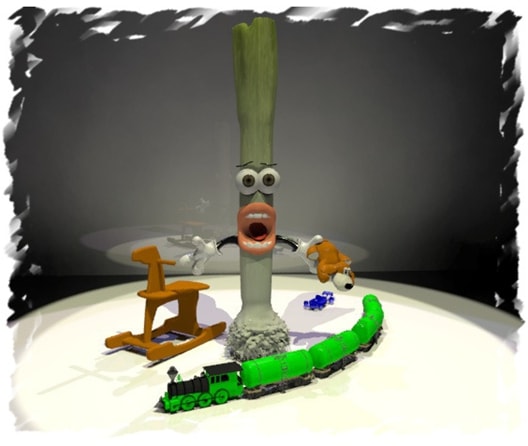 Things got really bad when one day that the other fruit and vegetables of the grocery store had gone out for a walk, the leek found a stuffed puppy toy forgotten in a crate. “Nobody will mind”, he thought and snatched it without further ado. That very same night however as soon as the fruit and vegetables returned home, the pineapple burst into tears when he realized his favorite toy was missing.

“Why are you crying my good pineapple?”, the tomato asked him.

“Somebody took my stuffed puppy”, he replied gripping his pillow tight. Then each and every fruit reassured him this was no big deal and that they would find his toy the very next morning. Their promises worked for a moment and they managed to calm him down, but as soon as the lights went off he started crying again.

“Without my puppy to keep an eye on me, I can barely close my eyelids”, the leek told them and kept on crying. This time, the plum also started crying out of sympathy, making an even greater fuss. “We won’t sleep tonight unless the puppy is found”, admitted the other fruit and vegetables and after putting the lights on again they swept the grocery store to find it. All of this in vain however, as the leek had hidden the stuffed puppy under his pillow.

Making sure the puppy was nowhere to be found in the store, they all went out carrying flashlights and searched the garden. Tired from lack of sleep, the leek decided that it was finally time to return the toy. So as not to be blamed for theft however, he thought it would be best to leave it inside the hollow of a tree in the garden right outside his window.

Walking on the tip of his toes to avoid getting noticed, he grabbed the puppy from his pillow and went out. No sooner had he counted two steps, and all the flashlights the other fruit and vegetables were carrying pointed at him.

“I was… uh… taking the dog for a walk!”, he justified himself, only to realize that nobody believed him. He then became red with shame, and admitted he had taken the puppy that very same afternoon without asking anybody. After realizing what terrible trouble he had put them into, he apologized both to the pineapple and the other fruit and vegetables.

From that day on he promised never to take the toy of another fruit or vegetable without telling them first.