The pomegranate that wanted to become a Knight

A POMEGRANATE once dreamed of becoming a Knight. "One day, I'm going to be a Knight in shining armor", it used to say to the other fruit hanging from the pomegranate tree. 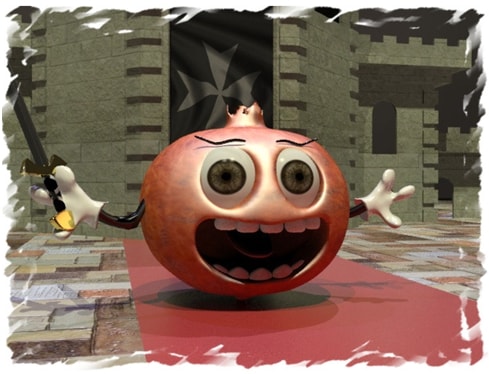 So one day he climbed down the tree and went after his dream. First he travelled to the other end of the garden, and then the grocery store and the neighboring city. "Excuse me, where could I find Knights nowadays?", he asked wherever it went, getting no answer back, only troubled looks. Until his travels brought him to a red rose, who told him: "in Rhodes, you may still find the Castle of the Knights".

The pomegranate was delighted to hear the answer. So he made a plan to get to Rhodes, find the Castle of the Knights, and become one of them. He travelled to Athens, then straight to the port of Piraeus and got in the first ship of the line. Through storms and seaways, the ship passed by all the islands, first Kythnos and Naxos, then Astypalaia and Nisyros. Throughout the journey he would not stop dreaming that as soon as he reached Rhodes his vision would become a reality: he would join the Knights in their Castle, and become one of them.

Finally getting to Rhodes, he was first amazed to see the port, then the Castle of the Knights itself. He ran to the great gate, then walked through the stone halls and corridors were he thought real Knights were to be found. He searched everywhere. No matter how hard, however, he would find suits of shining armor standing still in the numerous Castle halls, but not a single Knight wearing them. So he asked: "Where can I find real Knights?"

"The last Knights left the Castle ages ago, centuries to be precise", told him a tour guide. "Knighthood is a thing of the past, and you won't be able to find them anywhere in the world".

The pomegranate was really sad to hear the answer, as he realized his dream would never become reality. Not wanting to believe what he just heard, he went out in the streets of the city to get some fresh air.

He there found an old lady, who was trying to cross the street, but could not make it as the cars wouldn't let her. Our chivalrous pomegranate then, knowing the proprieties, helped her make it to the other side of the street. As soon as she set her foot firm on the pavement, she turned around and thanked him: "Thank you from the bottom of my heart, you are a true Knight!". The pomegranate was filled with pride to hear her and realized that a true Knight neither a shining armor nor a sword to prove his worth.

And this is indeed a matter of fact, as with his courtesy and good manners, later in life he managed to conquer the most impregnable fortresses, that is, the hearts of people.