THERE WAS ONCE A ZUCCHINI that had great talent in telling anecdotes. The other fruit and vegetables of the grocery store never lost a chance to hear his jokes, and would ask of him to entertain them on every occasion. But the zucchini also loved to make others so much that he had learned a whole book of anecdotes by heart. 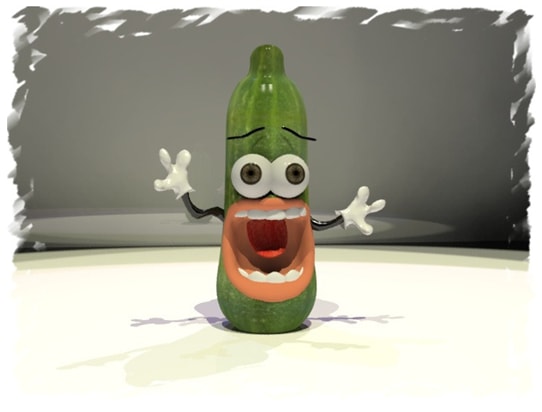 The zucchini rehearses his anecdotes

“Why don’t you put on a show for us?”, the cucumber, who really loved comedy shows, asked him one day. The fruit and vegetables of the garden found the idea fantastic, as they were certain they would cry with laughter. Our good zucchini however was stressed, as he had never performed his anecdotes before an audience. He was afraid that when the time came, he would get so nervous that he would lose his words. Eventually however, he came round to the cucumber’s words, accepting his challenge and agreeing to put on the show the very next Friday.

In the following days he rehearsed as much as he could: every night before going to sleep he carried a book of anecdotes with him and repeated the words until he was certain he knew them by heart. He even made a list of them, sorting them by the order with which he would perform them during show time. So well did he prepare, that he had found a suitable joke for every single fruit and vegetable that would attend the show, so they would all have fun together.

Just before the big day, the cucumber joined him in finding a suitable room; they placed chairs for the audience, as well as microphones, speakers, and spotlights to equip the stage. After making sure everything was perfect, they printed posters and leaflets so as to advertise the show.

When the big day came, the room was filled with fruit and vegetables that couldn’t wait to laugh their troubles away. Our good zucchini made a final rehearsal of his joke list, then walked the stage and grabbed the microphone. The crowd burst into applause as soon as they saw him walking and standing with such confidence.

When the round of applause was over, the zucchini told them the first anecdote: “You are very sour, said the lemon to the tomato!”. Both the tomato and the lemon burst with laughter. Soon the other fruit and vegetables followed them, and the zucchini followed up with a second anecdote. Then a third. When the time came for the fourth however, and he did not see the reaction he was expecting, doubts started clouding his mind.

The zucchini soon became so anxious that he started sweating and forgetting his script. So shocked was he that he lost his voice, and the fruit and vegetables wondered whether he would eventually carry on. “Why… did… the… orange… stop?”, he managed to say, and with a trembling voice followed up with the answer: “It run… out… of juice…”. Nobody found it funny.

“One more joke!”, demanded the cucumber. Our good zucchini then, having completely forgotten his words, thought of improvising. So as to make things simpler then, he thought of making fun of himself.

“You all think I get anxious on stage, but in reality I am as cool as a cucumber”, said the cucumber and the fruit and vegetables burst into laughter. Along with them laughed the cucumber, who found it so funny he started crying. The zucchini was delighted to have gotten over his stage fright.

Since the time, and after realizing he had no real need of preparing scripts to get going, he started improvising and using his audience to keep the fire burning, by making up jokes on spot.

Rumor has it that many years later, our good zucchini became such a skilled comedian that he even got his own show on the big screen.