The quince that loved scents

THERE WAS ONCE A QUINCE in a grocery store that really loved fragrances. He craved their smell so much that in his spare time he made a habit of collecting bottles of them, putting labels on them so as to keep track. So much did he love his hobby even, that every time he went for a walk with the other fruit and vegetables of the store, he would even wear a different fragrance so as to draw their attention. 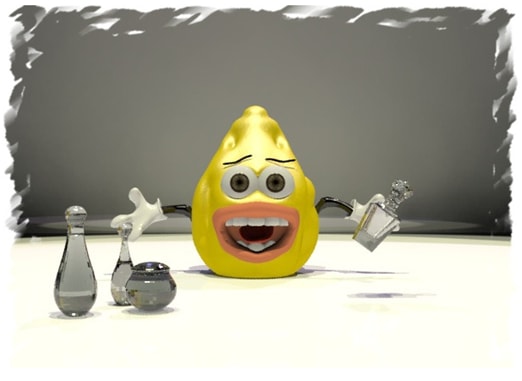 “You smell so nice”, told him one day the other fruit and vegetables to compliment him for the expensive scent he had bought the previous day. “But the melon smells even nicer!”, they added, and the quince became so jealous that his color changed to green. He then headed straight to the perfume store to find an even finer fragrance so as to surpass the melon. With much effort, he found a perfume that smelled even nicer.

The next day he sprayed himself all over and appeared in front of the other fruit and vegetables. The apple also joined their company this time. “You smell nicer than the melon, but the apple has surpassed both of you!”, exclaimed the other fruit and vegetables. As soon as he realized they were right, he headed straight to the perfume store again. And yet again he searched for a perfume that would surpass even the apple.

Certain for his expensive choice, the quince sprayed himself all over once more. But as soon as he appeared in front of the other fruit and vegetables and realized the peach had joined them, he was let down.

“You have to admit that he smells nicer”, the others told him and this time the quince was so let down that instead of visiting the perfume store, he preferred to go for a walk in the forest.

The next day that he met the others again, he found that a fragrant strawberry had joined them, whose smell would barely compare with anyone else’s. “Today you smell so nice that even the strawberry is jealous of you. What is the name of the perfume you are wearing?”, asked him the other fruit and vegetables.

“But I’m not wearing a perfume today!”, replied the quince in wonder. He then smelled himself, and was delighted to realize that his natural odor was far more pleasant than any other fruit or vegetable in the garden. They also agreed with him, and asked him not to cover his beautiful natural smell with artificial scents.

So thrilled was the quince with his finding that from that day on he decided to give away all those little perfumes he had collected to the broccoli, who anyways had more need of them.