ONCE UPON A TIME in a garden there used to be a broccoli that rarely ever bathed. The other fruit and vegetables of the garden closed their nostrils every time the saw him and avoided him, as a really bad smell accompanied him wherever he went.

So one day, he thought of using scents to smell nice. He visited a perfume store, and chose the most expensive of them, which was contained in a glass bottle with a rose stamp on it. “Two sprinkles are enough to make you smell nice for a whole day”, told the strawberry clerk to him. He smelled it and fell in love with it. 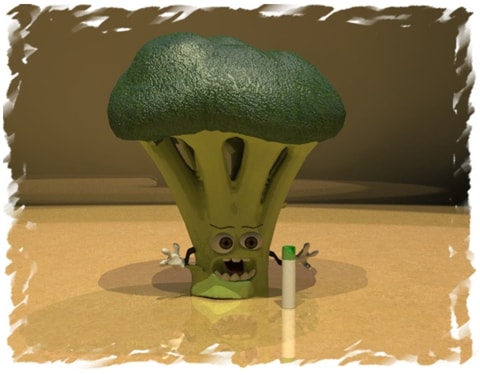 He then went home, and emptied the whole bottle on him, spraying himself from tip to toe, and then took a walk in the garden so as to get noticed.

The other fruit and vegetables found his smell really strange, as this time a really intense scent reminiscent of rose reached their noses. As soon as they came near to him however, the scent was so strong that they could only stand it for a few seconds.

“Now I am the one to smell nice like a rose, and not you”, he told them. They then started to make fun of him, realizing that he had emptied the whole bottle on him. “Let me hang out with the other flowers, and see if there is anyone with a sweeter smell than mine”, he continued basking.

After walking through the orchard, he decided that he was the best smelling vegetable to be found. “From now on, I’ll be wearing expensive perfumes, and nobody, no fruit, no vegetable, and not even a flower will smell better than me”, he said.

No sooner had he finished his words, than bees started following him, mistaking him for some rose. Their pollen spread throughout his body, and he ran as fast as he could to get away to escape the itchiness. His eyes became red, and soon enough he was sneezing with no hope of stopping it.

He ran and ran to get away, until, at some point, he found a river. Without much thought, he jumped in to save himself. The water washed the pollen away, and along with it the perfume with which he had sprayed his whole body.

Thank God he saved himself from the bees. As for the foul smell? He finally discovered that a simple bath can work miracles and make things much more bearable.