The banana that wanted to be a ballerina

There was once a banana that had a dream of someday becoming a ballerina. From a very young age, she would watch the other ballerinas dance, and dreamed that she would one day be like them, a great and famous dancer. The first time that she tried dancing however, she burst into tears, as she realized that bananas have no feet, unlike the other ballerinas. 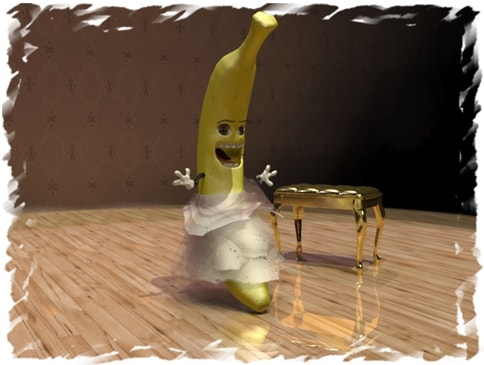 “I’ll never make it, as I have no feet…”, she cried till the tears reached the floor and flooded it. Then she tried using her body weight to stand and swirl with her hands, but no sooner had she left the ground than she lost her balance and fell again on the slippery floor. Then, a cute ballerina mouse plucked up the courage and approached her.

“Is there some way I can help you, my good banana?”, she asked her. The banana then replied: “I really love ballet dancing, but I have no feet, my dear mouse, unlike you and the rest of the dancers. I only managed to swirl once, and here I lay on the floor again”.

“When I dance, I dance with my heart. I forget my feet completely”, the mouse told her. “If you really want it, you can do it”.

And said good night to her with those words. She then sat in a corner and stared at the other ballerinas as they would dance with the tip of their toes, often not even touching the ground. It would sometimes look as if they were flying. Just staring at them she would forget time, not even noticing that night had come. Then one after another, the mouse and bunny ballerinas would take off their shoes, pack their stuff and leave the dance school.

That same night, after making sure the building was empty, the banana turned on the lights again and wore her ballerina clothes.

“Let me dance with my heart then”, she thought, and closed her eyes to enjoy music. The floor was finally all hers. Along with the music she slowly started to dance, this time without losing her balance not even once, letting her dream lead the way and direct her movement. She forgot that she lacked feet, and trusted her heart so much that she didn’t open her eyes not even for a moment to see where she was.

Soon it was day, and she was still dancing, barely taking notice of the light entering the windows. “I told you!”, shouted the mouse ballerina at her, and every other ballerina in the room gave her a big applause, as they were all amazed with her grace and rhythm.

So scared was she when she opened her eyes, that once more she fell on the floor. And yet again she burst into tears, but this time, it was tears of great joy, as her greatest dream had just become a reality.