The cherry plum that cried others a river

There was once a cherry plum that was very sensitive and would burst into tears for no good reason. The fruit and vegetables of the garden were really tired of him, as it would take him ages to stop, and used to make fun of him. 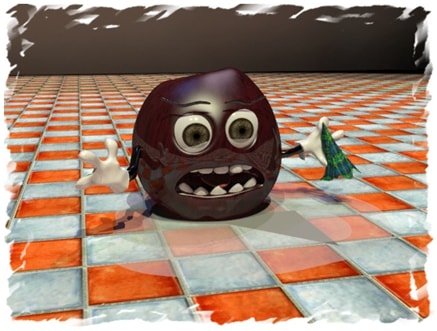 So one day, they all gathered to finally decide what to do with him. A tough melon, whose skin was thick, spoke first: "The cherry plum is so used to crying for no good reason that it is irritating. We' re better off without him", he told the fruit and vegetables of the garden.

But then a sweet strawberry stood up and said: "We shouldn't be tough with him. If he do away with him, he'll start crying again and not be able to stop it. What we can do is hide behind trees and rocks, and pretend we left him alone. This way, he’ll learn by himself how to stop it.”

So it happened. The next day that the cherry plum went for a walk, the other fruit and vegetables of the garden hid behind trees and rocks, waiting patiently for him to return. As soon as he was back in the garden, he thought they had gone without saying goodbye and had left him all alone.

“Where is everybody?”, he shrieked with his high voice. A tear then started flowing from his left eye. Then another followed, and another. He yelled and screamed, yet no one was to be found as the other fruit and vegetables would not leave their hiding places.

This is what happened then: the tears flowing from his eyes started puddle on the ground and formed streams. The streams then became rivers and lakes on the ground. The then continued to cry, until the tears flooded the garden, and he then found himself swimming in a sea of tears.

When he finally realized what he had done, he opened his eyes to see the terrible mess he had caused. “I am going to drown!”, he shouted, neither knowing how to swim nor having swimmies nearby to put on.

“Are you finally done crying?”, the strawberry asked him from afar, and added: “Now look at the terrible mess you have caused”. Then he saw the other fruit and vegetables approaching him wearing lifejackets and rowing boats. They gave him a helping hand to get on the boat, then handed over a towel to him to wipe himself dry. After calming himself and sweeping the last tears from his eyes, he stared at the flooded garden with amazement, wondering whether all the mess was really worth the trouble.

The next day that the garden went dry, the grass looked greener than ever, as the tears had watered the ground. The cherry plum then thanked the other fruit and vegetables for saving him and promised from that point on to “stiffen”.