The strawberry that loved chocolate

There was once a strawberry that really loved chocolate. She indulged into all sorts of chocolate: white or black, bitter or milk, with or without almond, but most of all, she loved sweet chocolate. “You are greedy and it will do you no good“, told her the other strawberries. 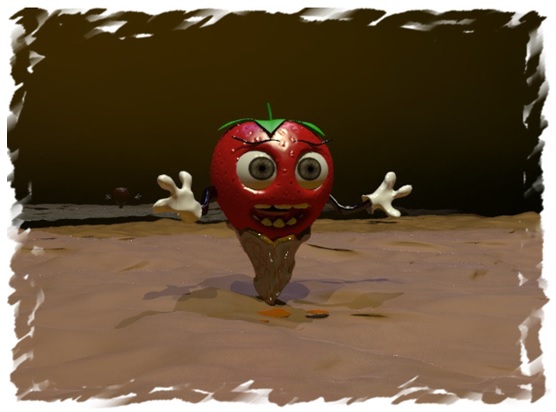 The strawberry that loved chocolate

She would not listen though, so one day, she thought of paying a visit to the nearest chocolate factory. So as not be discovered by the guards however, she thought of waiting until it was night. She also wore a trench coat and a hat, so that nobody would recognize her in the dark of the night.

When the time came and the lights went out, she sneaked into the chocolate factory. Tiptoeing through the dark corridors, she reached the big hall, where the strong, irresistible smell of chocolate reached her nostrils. She then lit the lights, only to discover that in front of her were five big cauldrons filled with hot chocolate. “Looks so yummy, I’ll bathe in it!”, said the strawberry, then gave a big jump and started swimming in the biggest cauldron.

So amazed was she by the chocolate factory that she took no notice of the time. She swam and ate as much as she could, to the point that her belly became swollen like a balloon and she got tired, falling asleep in the cauldron. When she opened her eyelids the next morning, right above her was a stocky, plump man who dipped his hands in the cauldron and snatched her. She got so scared she could barely speak.

“Chocolate is sweet, but chocolate with strawberry is even sweeter!”, shouted the guard and opened his mouth to devour the strawberry that was dripping with chocolate. With quick impulse, she hastily started shaking and splattered him in the eyes with the thick fluid that was all around her.  “My eyes!”, shouted the big man, then threw away the strawberry to clean himself. She ran as fast as she could.

As soon as he was able to see again, he started to chase her in the building. The bigger the strides he made, the faster she would run, dripping chocolate all over the factory corridors and walls. Seeing he could not run as fast, he stretched his big arms to catch her, only to stumble on a chocolate blot and fall the very last moment. She disappeared.

As soon as she reached the grocery store, filled with chocolate on her body, the other strawberries started laughing at her: “You are so greedy, that you fell in the chocolate!”

“You won’t believe what happened to me”, she replied. After telling them the story, they laughed at her misfortune. Her mishap however was a lesson to her, as from that point on, she stopped being greedy with sweets.